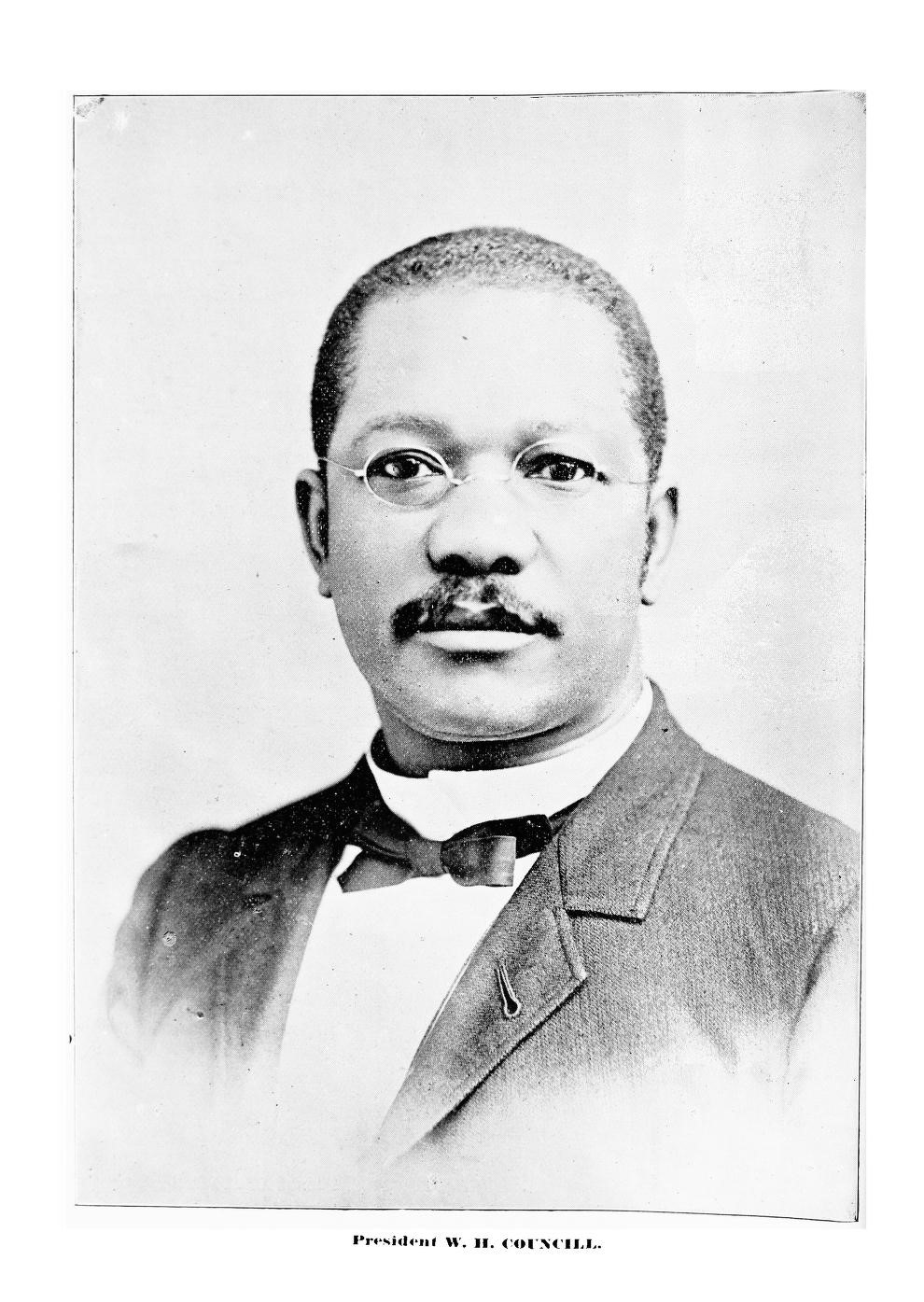 William Hooper Councill, educator and race leader, was born into slavery in Fayetteville, North Carolina, on July 12, 1849. His parents were both slaves on the Councill plantation. When William was five, his father escaped to Canada and tried unsuccessfully to obtain freedom for his family.  In 1857, William, his mother, and his brother, Cicero, were sold at the Richmond slave market to a trader, who in turn sold them on to a planter in Alabama. His two other brothers were sold separately.   When Union troops occupied Chattanooga, Tennessee during the Civil War, Councill and his family escaped through Union lines to the North.  He returned to Alabama in 1865 to attend a school for freedmen that had been started by Quakers. This would be Councill’s only formal schooling.  He worked and studied for three years before graduating in 1867. For several years Councill worked as a teacher in the black public schools in Alabama while moonlighting as a porter in hotels and restaurants. In 1869, at the age of 22, he opened Lincoln School in Huntsville for black children in the region.  In addition to his teaching duties, he attended night school where he studied chemistry, mathematics, law and Latin.  Councill was admitted to the Alabama bar but he never practiced law in the state.   Councill’s ambitions extended into politics and he became the chief enrolling clerk of the Alabama House of Representatives between 1872 and 1874.  He also served as secretary of a national civil rights convention in 1873.  In 1874 Councill ran unsuccessfully for a legislative seat.  One year later he was offered the federal patronage position as receiver of public lands for northern Alabama. Councill declined the post. In 1875, the Alabama legislature appointed 26 year old Councill as the first principal of the State Colored Normal School at Huntsville, which is now known as Alabama A&M University. The school opened on May 1, 1875 with an appropriation of $1,000 in the basement of a Huntsville church.  The Colored Normal School would train black teachers to work in Alabama's segregated school system.  By the mid-1880s, it rivaled Tuskegee Institute in central Alabama as vocational-industrial training facility.    Despite his achievements, Councill had his critics.  As a contemporary of Booker T. Washington, he and the Tuskegee principal often competed for favors and funds from the Alabama legislature and northern philanthropists.  Councill went even further than Washington in his attempt to win the favor of southern whites by appealing to the upper class’s sense of paternalism and racial superiority.  In 1877 Councill founded the Huntsville Herald, which he published and edited until 1884.  The following year he established St. John African Methodist Episcopal (AME) church in Huntsville.  Councill also wrote several books including, Lamp of Wisdom (1898), Negro Development in the South (1901), and The Bright Side of the Southern Question (1903).

In 1887, William Hooper Councill attracted wide attention when he filed a lawsuit with the Interstate Commerce Commission for being ejected from a first-class coach while traveling on an Alabama railroad.  That action later prompted his superiors to relieve him of his duties as president of the State Normal School, only to reappoint him in 1888.    The next two decades saw Councill becoming more publicly conciliatory and accommodating toward whites.  His stance on race relations was unclear: he regularly praised whites, approved of the “separate but equal” legal principle, and even declared that no people were “better suited for domestic and personal service than the Negro.”  Despite his earlier lawsuit, he now endorsed segregation, believing it provided opportunities for black businessmen, teachers, and professionals to work among their own people.

On April 9, 1909, following a long illness, William Hooper Councill died in Huntsville at the age of 61.